Posting these old ones, because a few Canadian coffee folk have been asking!

Posted by Dr. Coffee on December 30, 2013 in Uncategorized

The fishnets gets even more tangled…

This, ladies and gentlemen, is currently what my thesis plan looks like. This was a collaborative effort with my supervisors. I hope you all appreciate it for its abstract beauty…..

Most of this stuff is quite academic and preachy – my personal thoughts either stay personal or end up on my 100words or find their way on to Crackbook.com (highly addictive and brings on the illusion of being sociable when all you are doing is virtually poking your ex and providing copy for media scares about identity theft)
I am not in the mood for more essay writing, and I’m not sure what I would write at the moment anyway. I am slowly compiling a huge list of Worries, getting myself all wound up about what the next few months will hold, and wondering whether I am doing the right thing at all. I am just starting my second year of this PhD – that alone is a terrifying thought. The last year has gone so quickly, and I honestly do not feel prepared at all for Year 2 – which is fieldwork, fieldwork and more fieldwork, collecting my own real data and not just reading other people’s ideas. I don’t feel confident enough in my project or happy enough with the work I’ve done so far to be ready for this.

Take for example, these focus groups. The teenagers were fun, there were a few useful points to be drawn out of it, but for the most part, they were pretty silly. So, I did another group with Sheffield students, hoping that they would come out to support me because they share my suffering and probably have to do similar research themselves – and would also take it seriously enough for something useful to come out of it. That is not what happened. For a start, I ended up with a group to two – one took it seriously but for various reasons, couldn’t answer a lot of my questions. The other took it seriously in his own inimitable way, shall we say, which wasn’t actually the most helpful:


Bel: Do you go to coffee shops with groups of friends then?

I go to coffee shops with my Dear Friend. She’s my Friend. She’s called S—–. We have coffee mornings. And we air our… well, you know, we just, have heart to heart chats, we are on a very deep spiritual and profound level. Meaningful conversation. You know, putting the world to rights. She’s a woman of the world, you see. And I’m a man of the world. We just kind of like, amongst the sea of kids, we just found each other. She knows the crack, she knows how the world..how it goes down. So do I. So we tend to break bread. Usually Thursday or Wednesday mornings. It’ll probably happen… what day is it, is it Thursday tomorrow?

Oh, there’s one due then. It’s on the horizon.

The transcription of this interview took over three hours, and covers 12 full pages. Of this, I’d say about 200 words are actually on topic and useful. I have another two to do over the next fortnight. I am NOT looking forward to them AT ALL. That aside, I really am worried about not being able to get the information I need from these groups. It was pointed out both directly and inferred from that interview, that your average coffee drinker does not think about it in the same way I do. Whereas that is a fairly obvious point, I feel like I am not doing a great job of explaining this project to others, and how can I get useful data when people don’t understand what I’m asking them?

And then, I’m off on my journeys, and this is frighteningly close now. I’ve got all my flights booked, someone at Jubilee House Community (the coffee exporters) in Nicaragua emailed me with a phone number, saying “ring when you get here”. Which is suitably ad-hoc. I leave on the 30th October, but not directly to Nicaragua. On route I am going to:
A Conference on the Moral, Economic, and Social Life of Coffee

This is at Miami University in Ohio. This is the first big academic conference I’ve been to, certainly the first international one. And there will no doubt be loads of people – academics and industry professionals – who no doubt have a far better grasp of what they are talking about than I do, and I will sit in the corner terrified my own ignorance will be exposed at any time.

After that, I am flying to Managua via Houston, and ending up in Nicaragua’s capital late in the evening and with no idea of where to go when I get there. The plan is to go to Granada for a few days, see Donna and the kids and get myself acclimatised before looking up the JHC. But after that, who knows? After spending two months in Nicaragua collecting as much information about coffee waste and quality as I can, by whatever means I can, I am traveling overland to Costa Rica, where I will have to do exactly the same thing only on a much bigger plantation, where I have even more tenuous contacts to chase up.
Saying it is all a little scary is an understatement.

And then there is my even more personal concerns – leaving Carl for so long, even leaving the nice comfy safety net of university and my friends there. I have done this sort of thing before, I spent six months living with a wonderful family in Peru when I was just eighteen. When I was 20, I went to Nicaragua – twice, on a whim. I don’t remember either of these trips causing me this much anxiety. I’m hoping that this self-preservation, and marriage preservation instinct that is kicking in, is a sign of maturity. I know now that I am not invincible, and that is more scary than anything – I am thinking up more and more things to worry about.

But at the same time, it is amazingly exciting. Although I’ve never had any fixed idea on what I want to do with myself specifically, I’ve always wanted a job that would allow me to travel. Now I’ve got one, and I do love it – I am so lucky to have this opportunity. As nervous as I am, I wouldn’t change this for the world. After all, who is really going to complain about having to spend two months living here? 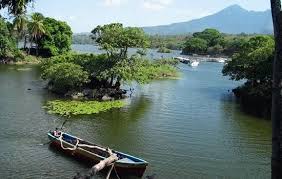 (Granada – Nicaragua. Thank you to Donna for the gorgeous photos!)

Posted by Dr. Coffee on September 22, 2008 in Uncategorized

01 Jun
So, it now looks like Costa Rica. And Nicaragua. Possibly sooner than I thought, as well. Christmas in the Carribean? I am supposed to be constructing Cunning Plans to make this a definite possibility (“A plan so cunning you could tie a tail on it and call it a weasel”) and I am…in a way. I would LOVE to go back to Nicaragua, but it doesn’t feel real yet. I don’t think I am the same person as I was the last time I disappeared to Latin America on a whim.

Instead I am dreaming and thinking and planning and fantasising about The Highly Improbably. I am collecting a diverse group of the Mentally Interesting it seems, and any idea reinterpreted through the minds of the Loons must, therefore, be borderline genius. The fine line has not so much been crossed as jumped on, scuffed, and bent to at least a 45 degree angle…One of the most Mentally Interesting is currently snoring upstairs. “Lets dance to Joy Division, celebrate the irony, everything is going wrong but we’re so happy!”

And what could be more sane, rational and sensible than planning my cafe? Sure, I have no money, no real capital, no time, no experience, no venue (this is NOT going to happen in Darlington. Ever. Understood?!) a crap credit rating, a doctorate to do, a mortgage to pay, plans to emigrate to the other side of the world in three years time, and family plans, but… hell, why not?

All I actually want to do with myself in the future is run my own cafe. I don’t actually need a PhD to do that, but I am at least learning far too much about coffee at the moment that I feel I’ve got to put this knowledge to use somehow! So, the cafe will be called Doctor Coffee’s. We will serve only the best, fair trade, highest quality (and probably Latin American) coffees made by skilled baristas. And it’s not going to be entirely espresso either! How revolutionary is that?

And I will cook. Lots. There is not going to be pannini in sight!! No fake Italianess, but Latino food, as authentic as I can make, and as designed by the experts at CafeChavalos in Nicaragua and Senora Julia in Peru, who’s recipes I am still using now! If amazing foods like quesedillas, tetelas, picarones and anticuchos can be made on the streets in Leon or Huancayo, I see no reason why I couldn’t make them in a cafe.

I was going to sell Cyberllama goods at the cafe too – Peruvian oddities for anyone interested. Carl and I started talking of this YEARS ago… he was going to get involved and turn it in to an internet cafe, and be responsible for the technical side of things. That was… 2002 I think. Nowadays, there wouldn’t be much call for internet cafes…the world changes too quickly. Now, he says he’ll support any mad scheme of mine, as long as he gets to keep a massive aquarium set into one wall – with piranhas in, of course, just to keep the Amazonian feel!

These plans have been delayed and postponed because we’ve never yet been in the position to even take ourselves seriously. We are full of intentions of moving to Vancouver post-PhD, and that would make a far better base for business than Darlington! But still… that is three years away. I am not a patient person, it seems….

And then the Mental Interesting contigent keep putting ideas in my head. A very dangerous activity. We have RASC – our writing group, full of the slightly eccentric creative types for whom even the most impractical ideas are a source of excitement. RASC currently meets in the overpriced and relatively atmosphere-deficient cafe at the Arts Centre. Wouldn’t it be so much more inspiring if we had our own venue? A writing cafe? That way, it wouldn’t be a business, it would be an arts venture. And we could get Arts grants, as opposed to business loans, and it would even be a community development and/or socially helpful project – it would provide gainful employment and a creative/productive outlet for the Mentally Interesting, teenage stench or otherwise unemployable members of our little town… With a little help from my friends, I could almost do it at the same time as my degree! And, the most bizarrely sensible suggestion yet: save on leases and business rates – set up my Gaggia machine in a caravan and have a travelling cafe! A Magic Cafe that pops up on request and is never in the same place twice! Yes yes yes!!!

(You can tell I’ve had my caffeine now, can’t you?)

Sigh. It would be so good.